Ch-4 Carbon and its Compounds

carbon atom loses four of its valence electrons, a huge amount of energy is involved. C4+ ion hence formed will be highly unstable due to the presence of six protons and two electrons.

If the carbon atom gains four electrons to achieve the nearest electronic configuration of the noble gas, Ne, C4− ion will be formed. But again, a huge amount of energy is required. Moreover, in C4+ ion it is difficult for 6 protons to hold 10 electrons. Hence, to satisfy its tetravalency, carbon shares all four of its valence electrons and forms covalent bonds.

Electron Dot Structure: The electron dot structures provides a picture of bonding in molecules in terms of the shared pairs of electrons and octet rule. 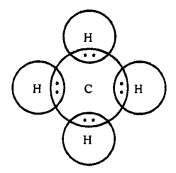 Allotropes of Carbon
Allotropy: The phenomenon in which the element exists in two or more different physical states with similar chemical properties are called Allotropy. 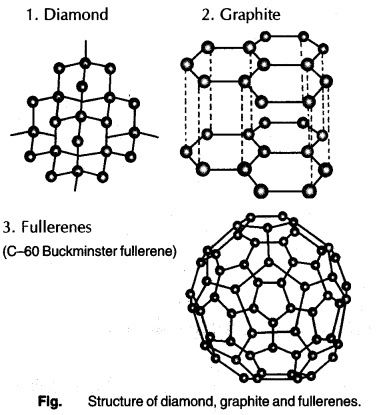 Saturated Hydrocarbon (Alkanes): General formula is CnH2n+2.
n = number of carbon atoms.
In this, the carbon atoms are connected by only a single bond.
For example; Methane (CH4), Ethane (C2H6) etc.

Unsaturated Hydrocarbons
Alkenes: General formula is CnH2n, where n = number of carbon atoms.
In this, the two carbon atoms are connected by double bond.

Alkynes: General formula is CnH2n-2, where n = number of carbon atoms. In this, the two carbon atoms are connected by triple bond.