Receptors: Receptors are the specialized tips of the nerve fibres that collect the information to be conducted by the nerves.
Receptors are in the sense organs of the animals.
These are classified as follows :

Functions of the nervous system

A neuron is the structural and functional unit of the nervous system.

Synapse: The point contact between the terminal branches of axon of one neuron with the dendrite of another neuron is called synapse.

Neuromuscular Junction (NMJ): NMJ is the point where a muscle fibre comes in contact with a motor neuron carrying nerve impulse from the control nervous system.

Transmission of nerve impulse: Nerve impulses travel in the following manner from one neutron to the next :
Dendrites → cell body → axon → nerve endings at the tip of axon → synapse → dendrite of next neuron.
Chemical released from axon tip of one neuron, cross the synapse or neuromuscular junction to reach the next cell.

Human brain is a highly complex organ, which is mainly composed of nervous tissue. The tissues are highly folded to accommodate a large surface area in less space. The brain is covered by a three-layered system of membranes, called meninges. Cerebrospinal fluid is filled between the meninges. The CSF providers cushion the brain against mechanical shocks. Furthermore, protection. The human brain can be divided into three regions, viz. forebrain, midbrain and hindbrain. 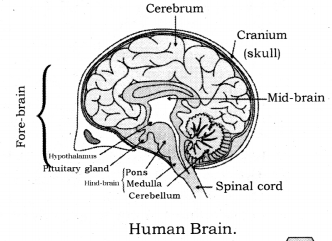 Hypothalamus: The hypothalamus lies at the base of the cerebrum. It controls sleep and wake cycle (circadian rhythm) of the body. It also controls the urges for eating and drinking.

Cerebellum: Cerebellum lies below the cerebrum and at the back of the whole structure. It coordinates the motor functions. When you are riding your bicycle, the perfect coordination between your pedalling and steering control is achieved by the cerebellum.

Medulla: Medulla forms the brain stem, along with the pons. It lies at the base of the brain and continues into the spinal cord. The medulla controls various involuntary functions, like hear beat respiration, etc.
It controls involuntary actions.
Example: Blood pressure, salivation, vomiting.

Pons: It relays impulses between the lower cerebellum and spinal cord, and higher parts of the brain like the cerebrum and midbrain, also regulates respiration.

Spinal cord: Spinal cord controls the reflex actions and conducts massages between different parts of the body and brain.

Reflex Action: Reflex action is a special case of involuntary movement involuntary organs. When a voluntary organ is in the vicinity of sudden danger, it is immediately pulled away from the danger to save itself. For example, when your hand touches a very hot electric iron, you move away your hand in a jerk. All of this happens in flash and your hand is saved from the imminent injury. This is an example of reflex action.

Reflex Arc: The path through which nerves signals, involved in a reflex action, travel is called the reflex arc. The following flow chart shows the flow of signal in a reflex arc.
Receptor → Sensory neuron → Relay neuron → Motor neuron → Effector (muscle)
The receptor is the organ which comes in the danger zone. The sensory neurons pick signals from the receptor and send them to the relay neuron. The relay neuron is present in the spinal cord. The spinal cord sends signals to the effector via the motor neuron. The effector comes in action, moves the receptor away from the danger.

Protection of brain and spinal cord
Brain is protected by a fluid filled balloon which acts as shocks absorber and enclosed in cranium (Brain box)
Spinal chord is enclosed in vertebral column.

Muscular Movements and Nervous Control: Muscle tissues have special filaments, called actin and myosin. When a muscle receives a nerve signal, a series of events is triggered in the muscle. Calcium ions enter the muscle cells. It result in actin and myosin filaments sliding towards each other and that is how a muscle contracts. Contraction in a muscle brings movement in the related organ.

Hormones: These are the chemical messengers secreted in very small amounts by specialised tissues called ductless glands. They act on target tissues/organs usually away from their source. Endocrine System helps in control and coordination through chemical compounds called hormones.

Endocrine Gland: A ductless gland that secretes hormones directly into the bloodstream.

Iodised salt is necessary because: Iodine mineral is essential part of thyronine hormone so it is important that we must consume iodised salt as in turn it is essential for thyroid gland as it controls carbohydrate, proteins and fat metabolism for best balance of growth deficiency of iodine might cause disease called goitre.

Diabetes: Cause : It is due to deficiency of insulin hormone secreted by pancreas that is responsible to lower/control the blood sugar levels.

Treatment : Patients have to internally administer injections of insulin hormone which helps in regulating blood-sugar level.

In case of flight or fight reaction to an emergency situation, Adrenal glands → release adrenaline into blood → which acts on heart and other tissues → causes faster heart beat → more oxygen to muscles → reduced blood supply to digestive system and skin → diversion of blood to skeletal muscles → increase in breathing rate.

(ii) Phototropic Movement: The growth in a plant part in response to light is called phototropic movement. Stems usually show positive phototropic movement, while roots usually show negative phototropic movement. If a plant is kept in a container in which no sunlight reaches and a hole in the container allows some sunlight; the stem finally grows in the direction of the sunlight. This happens because of a higher rate of cell division in the part of stem which is away from the sunlight. As a result, the stem bends towards the light. The heightened rate of cell division is attained by increased secretion of the plant hormone auxin in the which is away from sunlight.

(iii) Hydrotropic Movement: When roots grow in the soil, they usually grow towards the nearest source of water. This shows a positive hydrotropic movement.

(iv) Thigmotropism Movement: The growth in a plant part in response to touch is called thigmotropism movement. Such movements are seen in tendrils of climbers. The tendril grows in a way so as it can coil around a support. The differential rate of cell division in different parts of the tendril happens due to action of auxin.

2. Nastic Movement: The movement which do not depend on the direction from the stimulus acts are called nastic movement. For example, when someone touches the leaves of mimosa, the leaves droop. The drooping is independent of the direction from which the leaves are touched. Such movements usually happen because of changing water balance in the cells. When leaves of mimosa are touched, the cells in the leaves lose- water and become flaccid, resulting in drooping of leaves.

Control and Coordination in Plants