Heredity and Inherited Traits: Mendel’s Experiment; Sex determination.
Heredity refers to the transmission of characters from parents to offsprings. An inherited trait is a particular genetically determined feature that distinguishes a person from the others for example; attached or free ear lobes in human beings.

Rules for the inheritance of traits:
Mendel’s contribution: The rules for inheritance of traits in human beings are related to the fact that both mother and father contribute an equal amount of genetic material i.e. DNA to their offspring. So an offspring will get two versions of that trait from the two parents. Mendel worked out rules for inheritance of these traits. Gregor Johann Mendel regarded as the ‘Father of Genetics’ performed his experiments with garden peas (Pisum sativum) in the garden behind his monastery. He observed a number of contrasting characters in garden peas and observed their inheritance.

Some important terms
1. Chromosomes are long thread-like structures present in the nucleus of a cell which contain hereditary information of the cell in the form of genes.

2. DNA is a chemical in the chromosome which carries the traits in a coded form.

3. Gene is the part of a chromosome which controls a specific biological function.

4. Contrasting characters: A pair of visible charactes such as tall and dwarf, white and violet flowers, round and wrinkled seeds, green and yellow seeds etc.

5. Dominant trait: The character which expresses itself in a (Ft) generation is dominant trait. Example : Tallness is a dominant character in pea plant.

6. Recessive trait: The character which does not express itself but is present in a generation is recessive trait. Ex. dwarfism in the pea plant.

7. Homozygous: A condition in which both the genes of same type are present for example; an organism has both the genes for tallness it is expressed as TT and genes for dwarfness are written as tt.

8. Heterozygous: A condition in which both the genes are of different types for example; an organism has genes Tt it means it has a gene for tallness and the other for dwarfness only tall character is expressed.

9. Genotype: It is genetic make up of an individual for example; A pure tall plant is expressed as TT and hybrid tall as Tt.

10. Phenotype: It is external appearance of the organism for example; a plant having Tt composition will appear tall although it has gene for dwarfness.

11. Homologous pair of characters are those in which one member is contributed by the father and the other member by the mother and both have genes for the same character at the same position

Mendel’s Experiment: Mendel started his experiment on the pea plants. He conducted first monohybrid and then dihybrid crosses. 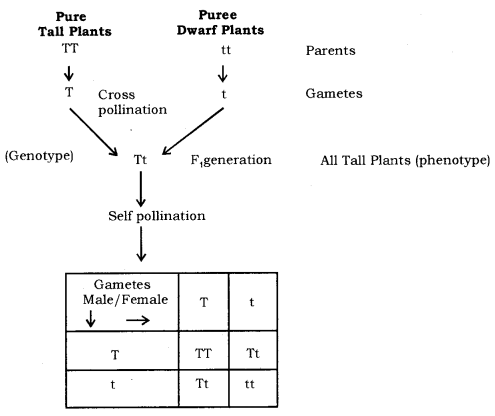 he took pure tall (genotype TT) and pure dwarf (genotype tt) pea plants and cross pollinated them to obtain first generation or first filial generation. In this figuration (F1 generation) he obtained only tall plants. This meant that only one of the parental traits was seen, not the mixture of the two. The plants of F generation or progeny are then self pollinated to obtain F2 generation or progeny. Now all plants were not tall. He obtained 75% tall plants and 25% dwarf plants i.e. the phenotypic ratio was 3:1. This indicates that in the F, generation both tall and dwarf traits were inherited but tallness expressed it self. Tallness is a dominant trait and dwarfness is a recessive trait. F2 generation has a genotypic ratio of 1 : 2 : 1 of three types of plants represented by TT, Tt and tt as shown in the cross.

Law of Dominance: When parents having pure contrasting characters are crossed then only one character expresses itself in the Ft generation. This character is the dominant character and the character/factor which cannot express itself is called the recessive character.

Dihybrid Cross: Mendel also carried out experiments to observe inheritance of two pairs of contrasting characters, which is called dihybrid cross. He cross breed pea plants bearing round green seed with plants bearing wrinkled and yellow seeds. In the Fx generation he obtained all round and yellow seeds it means round and yellow traits of seeds are dominant features while wrinkled and green are recessive. He self-pollinated the plants of F: generation to obtain F2 generation, he obtained four different types of seeds round yellow, round green, wrinkled yellow and wrinkled green in the ratio of 9 : 3 : 3 : 1. He concluded that traits are independently inherited

How do traits get expressed?
Cellular DNA is the information source for making proteins in the cell.
A part of DNA that provides information for one particular protein is called a gene for that protein for example; the height of a plant depends upon the growth hormone which is in turn controlled by the gene. If the gene is efficient and more growth hormone is secreted the plant will grow tall. If the gene for that particular protein gets altered and less of it is secreted when the plant will remain short. Both the parents contribute equally to the DNA of next generation during sexual reproduction. They actually contribute a copy of the same gene for example; when tall plant is crossed with short plant the gametes will have single gene either for tallness or for shortness. F1 generation will get one gene for tallness and other for shortness also 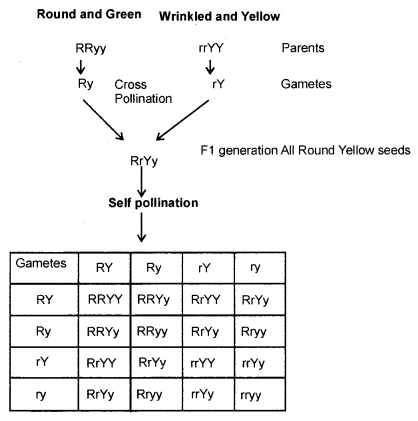 How do germ cells i.e. gametes get single set of genes from parents who have two copies in them ?
Each gene set is present, not as a single long thread of DNA, but as separate independent pieces each called a chromosome. Each cell gets two copies of the chromosome, one from each parent. Each germ cell or gamete has one copy of it because there is reductional division in the sex organs at the time of formation of gametes. When fertilization takes place normal number of chromosomes is restored in the progeny ensuring the stability of DNA of the species.

Sex determination in human beings: In human beings, all chromosomes are not paired. 22 chromosomes are paired but one pair called sex chromosome is odd in not having a perfect pair in males. Females have a perfect pair both represented by XX. On the other hand males have a normal sized X but the other is short called Y so it is shown as XY. All gametes or ova formed by the homogenetic female are similar i.e. have X chromosome. Males heterogenetic form two types of sperms i.e. half with X chromosome and the other half with Y chromosome. Sex of the baby will depend on fertilization. There are two possibilities : 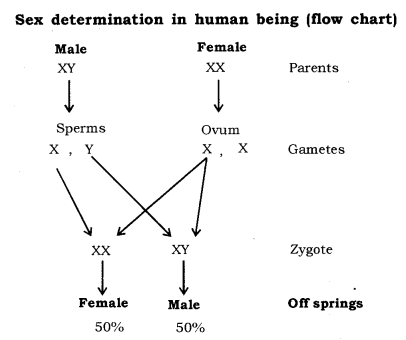 Sex chromosomes: Those chromosomes which play a role in determining sex of the newborn.

Charles Darwin’s Idea of Evolution: His concept of evolution was based on the idea that new species were formed due to variations that occurred in the organisms Nature played an important role in selecting the organisms having suitable variations.

Speciation: It means the development of one or more species from an existing species The factors that could lead to rise of a new species are :

Gene flow: It means the exchange of genetic material by interbreeding between populations of the same species or between individuals within a population. It increases the variation in the genetic composition of a population.

Genetic drift: It is random change in the frequency of alleles in a populate over successive generation due to errors in the gametes. The process is rapid in smaller population. Genetic drift can lead to accumulation of changes in the generations.

Natural selection: According to Darwin, natural selection also plays an important role in bringing about evolution of new species of plants and animals. According to him variations existed between the individuals of a population and some natural phenomena eliminated those individuals which were less adapted. The surviving population would pass the hereditary advantageous features to their offsprings. With time this process would give rise to organisms different from the original population and new species are formed.

Isolation: When a population of a species splits into two, it cannot reproduce with each other and forms a new species, for example; when a population of beetles feed on bushes on a mountain range, some may start feeding on nearby bushes finding entry into a new subpopulation. They reproduce with them so genes enter in a new population. Ultimately the two groups will be incapable of reproducing with each other and new species will be formed.

Evolution and Classification: The organisms show certain features, like appearance and behaviour which are called characteristics for example; Plants can perform photosynthesis. The basic characteristics are shared by a large number of organisms. More characteristics which two species have in common more closely are related, if they are more closely related then they have common ancestors (explain the example of brother sister and cousins). Evolutionary relationships can be traced with the help of the following : 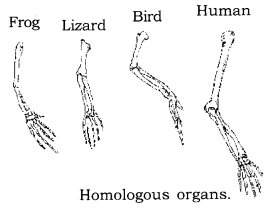 Analogous organs: Those organs which have different basic design and developmental origin but have similar appearance and perform a similar function, for example; wings of bat and bird. Wings of bat are folds of skin attached between fingers. But wing of birds are modified forelimbs.

Study of Fossils: Fossils are preserved remains of living organisms that lived in the past. When living organisms die their bodies decompose but some parts of their body may be in such an environment that they do not decompose for example; if a dead insect gets caught in hot mud it will not decompose quickly but the mud will harden and retain impressions of the body parts of the insects. These impressions are also called fossils: The age of fossil can be estimated in two ways :
The fossils that occur closer to earth surface are more recent to those found in deeper layers.
The second method is isotope dating i.e. detecting the ratio of different isotopes of the same element in the fossil material.