Use of Magnets: Magnets are used 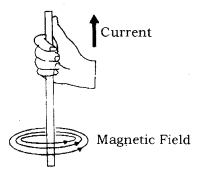 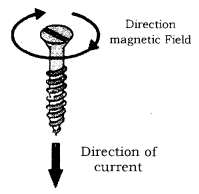 Magnetic field due to a current in a Solenoid: Solenoid is the coil with many circular turns of insulated copper wire wrapped closely in the shape of a cylinder. A current carrying solenoid produces similar pattern of magnetic field as a bar magnet. One end of solenoid behaves as the north pole and another end behaves as the south pole. 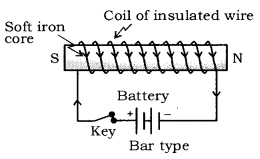 Principle of Electric Motor: When a rectangular coil is placed in a magnetic field and a current is passed through it, force acts on the coil, which rotates it continuously. With the rotation of the coil, the shaft attached to it also rotates. 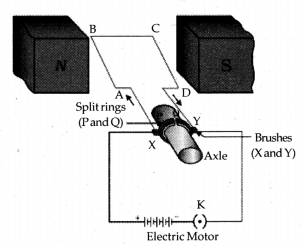 Construction: It consists of the following parts :

Fleming’s Right-Hand Rule: Electromagnetic induction can be explained with the help of Fleming’s Right Hand Rule. If the right hand is structured in a way that the index (fore ginger) finger, middle finger and thumb are in mutually perpendicular directions, then the thumb shows direction of induced current in the conductor, in conductor The directions of movement of conductor, magnetic field and induced current can be compared to three mutually perpendicular axes, i.e. x, y and z axes.

The mutually perpendicular directions also point to an important fact that when the magnetic field and movement of conductor are perpendicular, the magnitude of induced current would be maximum.
Electromagnetic induction is used in the conversion of kinetic energy into electrical energy. 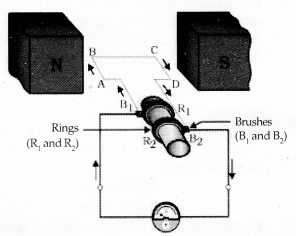 Thus, the direction of current changes once in every rotation. Due to this, the electric generator usually produces alternate current, i.e. A.C. To convert an A.C generator into a D.C generator, a split ring commutator is used. This helps in producing direct current.
Electrical generator is used to convert mechanical energy into electrical energy.

A.C and D.C Current
A.C – Alternate Current: Current in which direction is changed periodically is called Alternate Current. In India, most of the power stations generate alternate current. The direction of current changes after every 1/100 second in India, i.e. the frequency of A.C in India is 50 Hz. A.C is transmitted upto a long distance without much loss of energy is advantage of A.C over D.C.
D.C – Direct Current: Current that flows in one direction only is called Direct current. Electrochemical cells produce direct current.
Advantages of A.C over D.C

Domestic Electric Circuits: We receive electric supply through mains supported through the poles or cables. In our houses, we receive AC electric power of 220 V with a frequency of 50 Hz.
The 3 wires are as follows

Short Circuit: Short-circuiting is caused by the touching of live wires and neutral wire and sudden a large current flows.
It happens due to

Electric Fuse: It is a protective device used for protecting the circuit from short-circuiting and overloading. It is a piece of thin wire of material having a low melting point and high resistance.