The process of combination of two or more elements to form new compounds is governed by certain laws called laws of chemical combination. These are:

1. Law of conservation of mass.

Law of conservation of mass

An atom is the defining structure of an element, which cannot be broken by any chemical means.

The atomic symbol has three parts:-

Names of Atoms or Elements and Their Symbols:

A group of two or more than two atoms of the same or different elements that are chemically bonded together is called a molecule.

For example: Two atoms of hydrogen (H2) and one atom of oxygen (O2) react with each other and form one molecule of water.

The number of atoms present in a molecule of an element or a compound is known as its atomicity.

It is an electrically charged atom or group of atoms. It is formed by the loss or gain of one or more electrons by an atom.

Ions are of two types:

(i) Cation: It is positively charged ion and is formed by the loss of one or more electrons from an atom

For example: sodium atom, loses one electron to form a sodium ion Na

(ii) Anion: It is a negatively charged ion and is formed by the gain of one or more electrons by an atom.

For example a chlorine atom gains one electron to form a chloride ion Cl−.

It is defined by the combining power (or capacity) of an element.

Depending on their valency, elements can be classified as following:

(i) Monovalent cation: Having cationic valency of 1.

Monovalent anion: Having anionic valency of -1.

Divalent anion: Having anionic valency of −2.

Trivalent anion: Having anionic valency of -3.

(i)  While writing the chemical formulae for compounds, write the constituent elements with their valencies written down the respective elements.

(ii) Then crossover the valencies of the combining atoms as shown in the following examples. 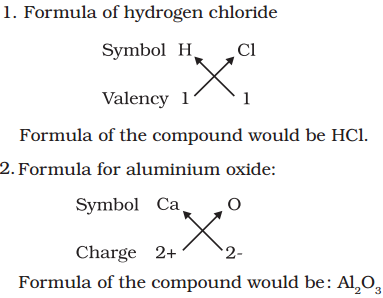 The number of times a molecule of a compound is heavier than the 1/12 of the mass of C-12 atom, is known as its molecular mass.

The molecular mass is equal to the sum of the atomic masses of all atoms present in one molecule of the substance.

It is the sum of the atomic masses of all atoms in a formula unit of a compound.

Formula unit mass is used for those substances whose constituent particles are ions.

The number of particles present in one mole (i.e. 6.023 x 1023 particles) is called Avogadro’s number or Avogadro’s constant.