The numbers with negative exponents also obey the following laws: 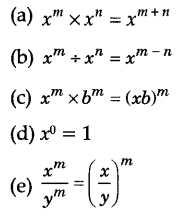 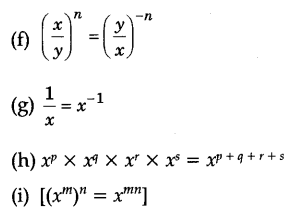 If a is any non-zero integer and n is a positive integer, then a × a × a × …. × a (n times) is written as an,
i.e., an is the continued product of a multiplied by itself n times.
Here, ‘a’ is called the base and ‘n’ is called the ‘exponent’ or ‘index’. The number an is read as ‘a raised to the power of n’ or simply as ‘nth power of a’. The notation an is called the exponential notation or power notation.

Laws of Exponents
If a, b are non-zero integers and m, n are any integers, then

Use of Exponents to Express Small Numbers in Standard Form
A number is said to be in standard form if it can be expressed in the form K x 10n where 1 ≤ K < 10 and n is an integer.

A number written in standard form is said to be expressed in scientific notation.