It is basically the restatement of the usual division system. The formal statement for this is-

For each pair of given positive integers a and b, there exist unique whole numbers q and r which satisfies the relation

All non-negative counting numbers including zero are known as whole numbers.

All negative and non-negative numbers including zero altogether known as integers.

An algorithm gives us some definite steps to solve a particular type of problem in a well-defined manner.

A lemma is a statement which is already proved and is used for proving other statements.

This concept is based on Euclid’s division lemma. This is the technique to calculate the HCF (Highest common factor) of given two positive integers m and n,

To calculate the HCF of two positive integers’ m and n with m > n, the following steps are followed:

The Fundamental Theorem of Arithmetic

We can factorize each composite number as a product of some prime numbers and of course, this prime factorization of a natural number is unique as the order of the prime factors doesn’t matter.

Rational numbers can be written in decimal form also which could be either terminating or non-terminating. E.g. 5/2 = 2.5 (terminating) and

The number ‘s’ is called irrational if it cannot be written in the form of m/n, where m and n are integers and n≠0 or in the simplest form, the numbers which are not rational are called irrational numbers. Example - √2, √3 etc.

Rational Number and their Decimal Expansions

Some Important Quetions for class 10 Maths

Question 2.
Show that 2√2 is an irrational number.
Solution:

Prove that the product of two consecutive positive integers is divisible by 2. 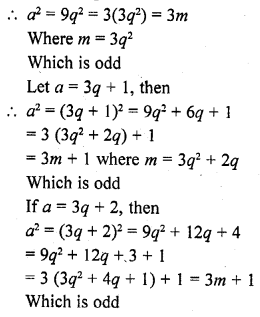